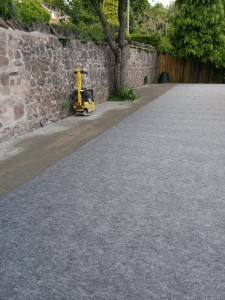 Stuart Canvas was approached by a private client who required a bespoke Non-Turf Training Facility in his back garden.

Initially, there was an existing hardcore base, which was suitable to use as a base for the training facility and so did not need replacing. The base was levelled and timber edges were installed below the level of the surrounding borders, so the carpet sat flush with the oak beams. Two sockets were then concreted into place, which held the steel work in place, supporting the green ball stop netting at the bowling end of the system.

After the timber edges were fixed into place, the team laid a geomembrane on top of the hardcore base and secured it, which stops particle migration and weeds from growing through, prolonging the life of the playing surface above it. 20 tonnes of Olliset was then tipped onto the membrane and levelled off with a 2 meter feather edge.

After the Olliset was compacted and levelled, the batting shockpad was fitted and secured. The carpet was then laid and nailed  into the timber edges. Where the infill carpet met the playing carpet, the joint was glued into place achieving a high finish.

The job from start to finish took three days and was completed by two men.

Our cricket installation team came and gave the Non-Turf training facility its finishing touches by erecting and installing a Test Batting Cage at the bowling end of the system.